The first 2,006 fans into the Xfinity Center received T-shirts with the names of the players and coaches from Maryland 2,006 national championship team in the shape of the championship trophy. 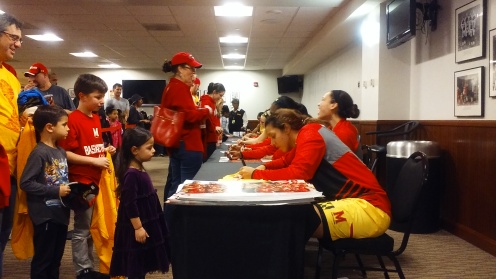 The Maryland players signed autographs for fans in the Xfinity Center’s Heritage Hall after the game.

The fifth-ranked Maryland Lady Terrapins started off 2016 by celebrating the 10th anniversary of their national championship, when Head Coach Brenda Frese’s team came from behind to defeat Duke 78-75 in overtime at what was then known as the Fleet Center in Boston. The first 2,006 fans at the Jan. 2 game against ninth-ranked Ohio State received commemorative T-shirts as they made their way inside the Xfinity Center. During timeouts, videos were played on the scoreboard as players from that championship team shared their thoughts on Frese and their championship season. However, at the end of the day, Maryland wasn’t able to celebrate a fifth straight win against Ohio State.

Maryland bounced back from a tough loss, coming up just short against defending national champion Connecticut, 83-73 in the Maggie Dixon Classic at Madison Square Garden on Dec. 28. Brionna Jones scored 24 points against the Huskies. The Terps responded with a 79-63 win two nights later in their Big Ten opener at Illinois. Jones had another big game, scoring 16 points and grabbing a career-high 19 rebounds.

Maryland held Ohio State scoreless for the first 4:05 of the first quarter. Ohio State finally got its offense untracked, but the first quarter was a sloppy one for both teams, as they combined for 13 turnovers. Maryland led 18-14 after the first, led by seven points from Shatori Walker-Kimbrough. The Terrapins stretched that lead out to 28-20 with a 10-3 run over a three-minute stretch, capped by a layup from Walker-Kimbrough with six and a half minutes left in the second quarter, forcing Ohio State to call a timeout as the crowd of 10,119 roared its approval. However, the Buckeyes held the advantage for the rest of the quarter, cutting Maryland’s lead to 40-37 at halftime. Redshirt senior guard Brene Moseley led all scorers with 13 points and five assists.

Early in the third quarter, Jones found herself in foul trouble after getting called for her third foul on Ohio State’s first possession of the quarter. That triggered a 9-0 run by the Buckeyes to take a 46-42 lead as Maryland called a timeout with 7:42 left in the period. That timeout appeared to spark the Terrapins, as Moseley set up back-to-back three-pointers by Kristen Confroy and Walker-Kimbrough, and then made a free throw to put Maryland back up, 49-47 with just under seven minutes left in the third. Ohio State closed out the quarter on a 7-2 run to take a 61-57 lead into the final 10 minutes.

A three-pointer by the Buckeyes’ Ameryst Alston stretched Ohio State’s lead to 70-63 with 7:11 left in regulation. Walker-Kimbrough responded with a three of her own that cut the Buckeyes lead in half and pulled Maryland to within 72-69 with 3:11 left. However, that was as close as the Terrapins (12-2, 1-1 Big Ten) would get the rest of the way as they lost to Ohio State (10-3, 2-0 Big Ten) 80-71. Kelsey Mitchell of the Buckeyes led all scorers with 27 points, and the Buckeyes outscored the Terrapins in the paint, 34-14. Moseley scored 20 and dished out 10 assists off the bench. This was Maryland’s first ever loss in the Big Ten after 22 straight wins, and snapped a 28-game home winning streak. Buckeyes head coach Kevin McGuff acknowledged the significance of the win, but didn’t want his players to make it out to be more than it really was.

“I have a tremendous amount of respect for Maryland, and what Brenda and her staff have been able to accomplish here, so it’s a great road win against a great team. At the same time, we gotta take it for what it is: one Big Ten win,” McGuff said. “So we got to get back to work, make sure we continue to get better. As I told the team, we’re going to see Maryland again, and they’re going to be better, because they have a great team, and they always improve throughout the year, so if we’re not improving, and we’re not better, it’s not going to go our way.”

Frese chalked up the uncharacteristic play of her team to the effects of playing three games in less than a week.

“It definitely looked like you saw the effects and the impact of three games in six days. It’s not an excuse in terms of how we played. Like I told our team in the locker room, when you want to be a championship team, we want to compete for titles, there’s going to come a time in the tournament where we got to play three games in three days,” Frese said. “I thought there were a lot of uncharacteristic plays of us with fatigue today, which is the mental side of the game for us as a team that we got to improve on.” Frese credited Ohio State for coming out with more energy in the second half, and said her team played loose with the ball, committing 20 turnovers. With all the hype about celebrating the 10th anniversary of Maryland’s national championship, Walker-Kimbrough took responsibility for the loss.

“Today…I don’t think I came out ready to play, and so I’ll take this loss for my team. I have to come out better, and play a lot better,” said Walker-Kimbrough, who scored 16 points, but only shot six of 17 from the floor, and committed seven turnovers.